The Golden Retrievers are outgoing, happy, and confident companions. They are known for their happy-go-lucky nature and are a popular choice for a family dog as they are kind and gentle with children.

But even the best of us, both dogs and humans, can be pushed to our limit when certain behaviors towards us occur. And the Golden Retriever is no exception to the rule.

If you push your dog into unknown situations without teaching them what is expected of them, or if your child decides to play with the dog’s food, then the situation can change.

Knowing the signs of aggression, what upsets your Golden Retriever, and ways in which to manage the situation is the difference between a warning from your dog and an attack.

It is the prudent owner who remains calm at the first show of aggression and backs off to assess the situation. Lashing out at the dog for their behavior will not work. You may cower your dog, but they also may learn to fear you which will lead to a higher form of aggression as they protect what matters to them.

Respect your dog and teach your family and friends not to push your dog when it comes to things that are important to them such as certain toys or some foods. And never stare intently at your Golden Retriever or any dog, and it is perceived as a challenge by your dog.

Golden Retrievers Compared to other Breeds for Aggression

In comparison to other breeds of dogs, the Golden Retriever is low on the scale of aggression. Part of that comes from their breeding.

They were originally bred to retrieve what their masters shot such as waterfowl and to bring it back and drop it at their master’s feet. Imagine if their master had to chase the dog and wrestle the waterfowl from the jaws of his Golden Retriever every time he shot a bird! The partnership wouldn’t have worked.

The Golden Retriever has learned to live with humans and is more tolerant than many other breeds of dogs.

But like any dog, they must be trained so that they know what is expected from them.

How Golden Retrievers Score on Aggression

Aggression rises from fear or uncertainty of a situation and can be overcome through socializing and learning certain skills so that they are confident and outgoing in life.

The 5 least aggressive dog breeds are as follows:

Signs That Your Golden Retriever is Getting Aggressive

Most people can see the signs of aggression in a dog. To be fair, most dogs will warn when they have had enough of certain behavior. Do not ignore this warning.

A dog that is in an aggressive state may lose control of itself and the results can be horrific. Take your Golden Retriever seriously if they shape up aggressively.

Here are some signals that your dog will give you when they are feeling anxious and aggressive:

You never, ever want to push your Golden Retriever to this final aggressive act. At the very first signs of a warning, take it seriously. Back off, leave them a way out, and don’t stare back at them.

The above describes the worst of aggression, especially taking it to the final attack stage.

At best, a low growl and warning are enough to let you know there is a problem and let you take action to avoid it again. Never beat or abuse your dog. You may think that they understand our language, but they don’t.

Change their behavior through training, teaching your dog to trust you, and providing them with a way out of a situation – don’t make them feel trapped.

Food and possessions are often very important to a dog, even a Golden Retriever. Luckily your Golden friend is a devoted and usually gentle friend. They will work with you to overcome a few glitches in your relationship.

Why Is Your Golden Retriever Getting So Aggressive? 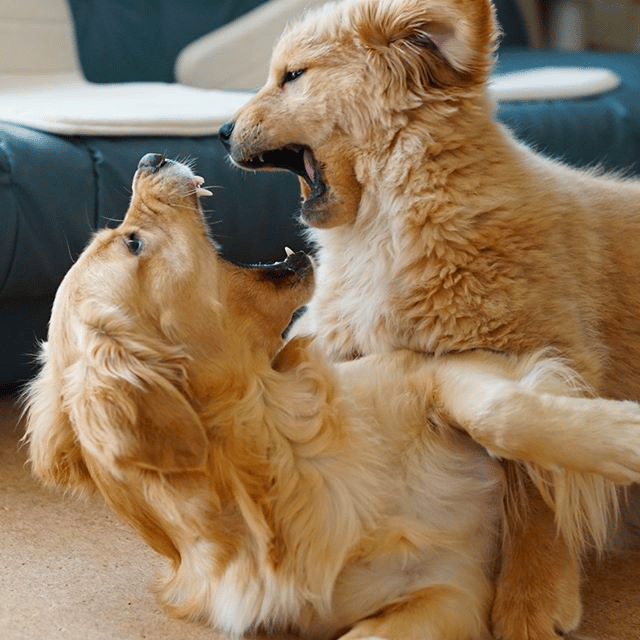 Many people may be unaware of some of the triggers that can make the Golden Retriever or indeed any breed of dog aggressive. What may seem silly to a human, can be extremely serious for your furry friend.

Here is a list of some of the common canine triggers for aggression:

For a dog, this is often the single most contentious trigger for aggression. Food is a very highly rated asset in the doggy world, so it can become the cause of aggression. Let your Golden Retriever eat in peace, don’t try to play with them while they eat.

Defensive aggression is triggered by fear within your Golden Retriever, but instead of running away, they decide to attack rather than run away. In most cases, the recipient will be bitten. If a guest gets too rough with your Golden, they may end up on the wrong end of the stick.

Predatory aggression is a built-in reaction and comes from their long distant past. Fast-moving objects such as a car and people on a skateboard or a bike, all are attractive to a dog to chase after these objects. It is the thrill of the chase, of capturing a moving target which is natural, but it can be extremely upsetting for a cyclist to have a dog race after them barking in a menacing way, and it can cause an accident.

Redirected aggression is caused by frustration. When someone walks between the dog and the thing that caused their frustration, well, that unfortunate person will be bitten. An example of this is when an owner tries to step in between two dogs when they are shaping up to fight each other.

Frustration aggression occurs when your dog gets excited but is held back from going after it by someone or something. If your dog gets excited when out walking and wants to take off after a cat and you hold it back, they may start biting the leash or even your hand so that they can get away.

Social aggression is more often displayed in an outing with many dogs interacting. They establish their own ranking, and if you take something away from one dog and give it to another dog, the first dog can become hostile and aggressive.

Pain can often lead to aggression. Whether they are injured or have a health condition, if they are in pain, they can respond with aggression because when they are moved, they experience pain. An injured or sick dog should be approached very carefully, and don’t assume your friendly Golden Retriever won’t bite you.

Territorial aggression is when your Golden Retriever assumes a protective attitude toward you and your home and anyone who invades ‘their’ territory. They are guarding their boundaries to what they believe is theirs. They need to learn to chill out when someone walks onto the property. Training them to ignore or at least accept someone on their turf requires time and patience.

If your male Golden Retriever has competition for a mate, then the gloves will be off and aggression with often erupt. When your Golden is close to a female in heat, keep them on a leash and remove them before they become aggressive.

5 Tips That Will Prevent/Eliminate Aggression in Golden Retrievers

Socializing your Golden Retriever from the moment they become part of your family is one very important way to avoid or fix an aggression issue within your treasured furry friend.

Here are 5 important ideas to help you live in peace with your dog:

Introducing your dog to plenty of new people at a young age guarantees that they will grow up to be confident, happy dogs.

Problems such as aggression arise when your Golden is bored, left alone for too long, is mistreated, or neglected. Fear creeps in, anger bubbles up, and at the slightest provocation, the dog will react aggressively.

The Golden Retriever is normally a calm, friendly and outgoing dog, one who delights in action and loves being with their human family.

They are rated very low for aggression but keep in mind that even the nicest of dogs can be pushed into aggression by a careless owner, lack of care, or acts of cruelty.

Although the Golden is kind and gentle with children, never leave a young toddler alone with any dog. Children don’t mean to be unkind, but if they hurt your Golden Retriever unintentionally, the dog may retaliate aggressively.

Always teach your children to be kind and gentle with any animal, and the issue of aggression in a Golden Retriever will never raise its head.