Golden Retrievers are one of the most popular dog breeds in America. Most people can identify them because of their long and luxurious coats. But not everyone wants a Golden Retriever with long hair.

Are you excited to find a short-haired Golden Retriever? Unfortunately, that search may take a long time.

Short-haired Golden Retrievers aren’t really a thing, however, some Goldens have shorter hair compared to others.

Is There A Short-Haired Golden Retriever?

The American Kennel Club doesn’t recognize short-haired Golden Retrievers as a breed. In fact, if a Golden Retriever has short hair, then they don’t meet the breed standards of AKC show dogs.

Just because there’s technically no such thing as a short-haired Golden Retriever doesn’t mean that there aren’t some Golden Retrievers that have shorter hair than others.

For instance, a field Golden naturally has shorter hair than a Golden Retriever that has been bred for show.

It’s not a good idea to convert your Golden to a short-haired Golden through excessive grooming because it can not only destroy their coat but also jeopardize their health.

If you’re trying to find a short-haired Golden Retriever because you have allergies, then you’re probably out of luck.

It’s not the dog’s fur that causes allergies, usually.

Instead, people are typically allergic to pet dander (which is basically dead skin flakes), while others are allergic to urine or saliva.

Because of this, getting a Golden Retriever with short hair may not alleviate your allergy situation much.

They’ll still shed, you’ll still have to deal with dander, and there’s no way you can get a Golden Retriever that doesn’t lick you or bring you slobbery toys, so you’re going to be exposed to saliva, as well.

We should discuss various types of Golden Retrievers before we go much further.

Which Types of Golden Retrievers Have Shorter Hair?

In all actuality, there’s only one breed of Golden Retriever. However, this one breed has several different types or variations.

One type of Golden you should know about if you’re looking for a short-haired Golden is the field-bred Golden Retriever or field Golden.

They’ve been bred to work in fields or to hunt. Some of their key characteristics are being athletic, energetic, and loyal (of course all types of Golden Retrievers are quite loyal). Their coats are usually darker, and can even be red.

But the most relevant trait is that their coats are short.

Show Goldens, on the other hand, were bred for their looks and their temperament. They’ve been bred to meet breed standards set by show judges, like a long coat and stocky body.

You can also find companion or therapy Goldens, which weren’t bred for the show OR for work, with shorter hair, too. You just have to know how to look for them.

There are also a lot of Golden Retriever mixes with short hair.

What Factors Influence the Length of a Golden’s Hair?

How do some Golden Retrievers wind up with short coats?

It’s in their genetics. In fact, the gene that causes Golden Retrievers to have long hair is known as FGF5, and it’s a recessive gene that controls how long your dog’s hair gets and controls their shedding cycle.

Other factors that influence the length of a Golden Retriever’s hair are:

Here are some of the reasons a Golden Retriever may have short hair:

If you’d like to know more about how to choose a good breeder, check out our article: How to Find The Reputable Golden Retriever Breeders and What to Avoid.

At What Age Do Golden Retrievers Get Full Hair?

Another factor that affects your pup’s coat is their age.

Golden Retriever puppies start their lives with hair, like all puppies. Golden puppies transform from having short, fluffy coats to having long, flowing coats as they grow. They start growing their adult coat when they’re 3 months old. This and the feathering, or light hair on their tail continue to grow as they do.

Their adult coat will be darker than their puppy fur. You’ll notice their feathering will be more distinct when they get to be about 8 months old.

Golden Retrievers never actually lose their puppy fur. That gets sort of pushed down and turns into their undercoat. It thickens up as they grow. And their outer adult coat gets longer as they age towards adulthood, too.

Golden Retrievers grow at a rapid rate. They’ve typically reached their adult height when they’re about a year old. However, they don’t grow their full coats until their about 18 months old. Goldens are considered to be fully grown by the time they’re two years old.

So if you see your neighbor walking their Golden down the street and you’re admiring their flowing coat, just know that unless that dog is a year and a half old, its coat isn’t completely grown in. It’ll get even longer!

You may be wondering whether there’s anything you can do to keep your pup’s hair short over time.

You can actually trim your Golden Retriever’s hair to keep it short.

It’s important that you take your Golden to a professional groomer that knows how to groom Goldens. There are specific areas that should be trimmed.

You don’t need to worry about grooming your Golden much. They naturally shed so that it maintains a coat equilibrium.

Do Golden Retrievers Shed a lot?

Golden Retrievers of any type just shed a LOT.

You sort of just get used to it when you own Goldens, but there’s going to be hair all over your clothes, furniture, floors, etc. You might even find it in your food occasionally!

Here are some tips for dealing with Golden Retriever shedding:

You should start brushing your Golden when they’re a puppy. This serves a dual purpose: it will cut back on the hair all over the house, but it will also get your puppy used to grooming and give you some bonding time.

Whatever you do, don’t just shave your Golden Retriever.

Most Golden Retriever owners know this, but others may not: Goldens have double coats. This means they have a shorter, softer undercoat that regulates their temperature, and a waterproof outercoat that’s designed to protect them from things like dirt and foreign objects or debris.

It may seem like you’re being nice to your dog when you shave it in the summer, but you’re really not. The undercoat regulates their body temperature- even in the summer. So this can cause a lot of health issues for your pup.

If you shave your Golden’s coat, then it may just never stop shedding because it will throw off its natural shedding equilibrium.

Another thing to consider is that if you cut the outer coat too short, it may never grow in the same way. I’ve read a lot of internet forums where people share stories about taking their Goldens to groomers who give them really bad hair cuts, and they simply didn’t have the lustrous coat they once did anymore.

It’s important to remember that even if you’re a little afraid of the intense shedding that comes with most Golden Retrievers, this is a natural process that you can’t stop. They’ll likely shed throughout the year, with shedding during some seasons being worse than others.

Other Options if You Want a Short-Haired Golden Retriever

If you want a Golden Retriever but don’t want the hassle that comes from their long hair and shedding, then it may be a good idea to consider getting a different breed.

For instance, Golden Retriever mixes, Labradors, and Goldendoodles are all fine choices for people who want short-haired dogs with a similar temperament.

Which Dogs Can Be Mistaken For Short-Haired Golden Retrievers?

Here’s a look at the two most common breeds mistaken for Golden Retrievers:

If you know what you’re looking for, it’s pretty easy to tell the difference between a Golden and a Labrador. The most distinguishable features are that Goldens have long hair, while Labradors have short hair. They’re also heavier than Golden Retrievers, weighing between 55-80 lbs. And Labradors shed year-round, not just at the change of seasons.

For a more thorough comparison, check out our Golden Retriever Vs. Labrador Retriever: Complete Comparison.

This breed is very similar to Golden Retrievers, but their coat is flat, while a Golden’s coat is wavy. A flat-coated retriever’s coat is also not waterproof the way a Golden Retriever is. One thing that makes it hard to differentiate a flat-coated retriever from a Golden one is the fact that they both have long, thick hair. However, if you have a flat coat, then you’ll notice that they’re not as active as Goldens and they don’t make a lot of noise.

If you feel like your dog’s breed has been misidentified, you have a couple of options available to you.

Your first option is to check with your veterinarian. Veterinarians have gone to school for a long time and have years of experience with dogs, so they can help identify your dog’s breed. Schedule an examination with your vet to find out whether you’ve got a Golden, or something else.

Another option is using a new tool that’s recently been introduced to the market: dog DNA testing. You can buy these online fairly cheap, but some vets offer them in their offices, as well. This sort of genetic testing can not only give you important insights about your dog’s health but also definitively tell you which breed they are. It can even tell you which dog breeds are in your dog’s family tree in previous generations, which can be pretty interesting.

If you find out you’ve got a mixed breed, or another breed entirely, then of course that’s frustrating. However, it doesn’t really change anything, does it? You’ll love your dog, regardless of its breed and genetics. So finding some surprising information about your dog’s genetics shouldn’t change your relationship with them.

But, if you’re going to take anything away from this article, it should be that a Golden Retriever’s shedding is manageable. There’s no reason to be turned off by it. These are adorable dogs with hearts of gold and great personalities that are loyal to the end. So, to most Golden Retriever owners (myself included) it seems a little silly to pass up a marvelous dog simply because it may shed a little too much to suit you.

With that being said, of course, you should do whatever feels right to you and choose the dog that fits your needs the best! 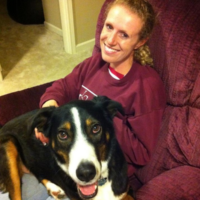 Brianna York is a lifelong animal lover who has been devoted to dogs and shows horses for years. She still shows Arabian horses around the country and is devoted to her dogs and cats. Animals and writing are her passion and she invests her heart and soul into both. Read more about her.